So while i’m looking back nostalgically at past glory days of british comedy. I feel compelled to mention the Young Ones which is widely recognised as a landmark television series that changed comedy forever. I really feel the Comic Strip did that first but because it was on the BBC the young ones gets credit. See until this tv show most british sit coms were about middle class people being jolly good and having “rotten adventures” this was about a bunch of low class students living in communal housing and interacting with each other in a zany and quite frankly weird way.

The plot is non existent and pretty much impossible to synapsis so I’ll just describe the basic idea behind it. There was Vivian played by Adrian Edmondson, the heavy metal punk rocker studying veterinary. He was into wide spread destruction and is possibly most famous for his long winded rant about the Good Life. my mom who watched the show when it first aired said she and everybody else cheered when he finished it was that inspiring. The iconic line: Their just a couple of reactionary stereotypes confirming the myth that everybody in england is basically nice and I HATE THEM!

There was Rik played by now deceased comedy legend Rik Mayall as “The peoples poet” One of those not very intelligent people that think their smart and deep. Wrote god awful poetry and saw himself as the leader of a movment, was into Anarchy but was probably the kind of person that attended anarchist meetings with a commitee and treasurey. You know, that kind of hipser dick wad. Anyway as Rik mayall was playing him he has alot of kick ass lines and shining moments throughout the series, possibly when he tries to kill himself with laxatives is probably my favorite bit in the show.

There was mike the cool one. Suave and sophisticated he was the de facto leader of the group. Everyone tried to suck up to him and everyone wanted his approval. He was definately the Fonzie of this group lol. Not as cool as he thought he was though, just by comparison to everyone else he was pretty awesome. My best memories in the show of him are when he finds buddy holly in his room and when they find oil in the basement and he becomes El Presidente.

Finally we have Neal. The looser hippy person that’s constantly depressed over nothing, miserable at the world and determined to be the worst one in the group when it comes to personal tradegy and loss. Obviously the smartest one in the house, but as I said a total hippy. Known for his catchphrase Everythings Heavy, I always felt Neal was the most awesome of the lot as his style of acting makes you think he’s not really acting at all. My favorite episode with him is the one where his parents come round for tea. Just happens randomly lol. 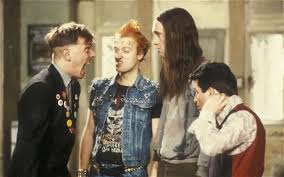 As I said i believe the Comic Strip takes credit for starting the whole alternative comedy on tv kind of thing but the young ones is definately an iconic important show. And it’s funny as well which the Comic Strip never really was lol.