I know right! HOW IN THE HELL CAN I DO THIS IN 1000 WORDS OR LESS! Well the good news is I don’t really have a limit, its just the limit I set myself to stop myself rambling too much or in this case Ranting. Yes today I look at possibly the worst attempt at a comic book movie in human history, worse even then the green latern, more horrifying then howard the duck and in some countries you can get executed for even acknowledging it exists. Argh O.k so let’s start at the begining.

This moves has three hero’s and three villians. We got Batman, robin and bat girl facing off against Mr Freeze, Poison Ivy and Bane. Comparing Tom Hardy to whoever the hell was playing Bane in this shit fest is like comparing shit to cream as a desert snack. If you’re a Bane fan you got sucker punched the worst here and I genuinely feel bad for you in fact you know what? I’m sorry Bane fans. Luckily I cared little for the character so I was able to endure that…. Travesty.

WHAT THE HELL IS JOEL SCHUMAKERS PROBLEM ANYWAY!?! IS HE ANTI BATMAN OR SOMETHING??? WHY DO THE MOVIE IF YOU HATE IT!!

Right so now i’ve got my shouting done lets look at Poison Ivy and Mr Freeze. He wanted to get some diamonds to power his machine to turn gotham into a frozen wasteland so he could work on saving his wife. She wanted to kill all mammalian life and replace it with plant’s and botanty. Plants by the way don’t typically thrive in the antarctic. Naturally they’ll team up………………. Cos…… Because……….. Reasons. Argh. Poison Ivy is usually portrayed as an attractive sexy woman so obviously they got Uma thurman to play her, cos shes so hot.. If you find Uma attractive sorry for that but I personally think shes ugly and too skinny. Thats a personal preference though I guess that has to slide. Apart from that she’s one of two characters in this film that’s played almost accurately and for that I’m almost grateful.

Mr Freeze however couldn’t have been played more wrong if it had been a guy with a tan and a hawaiian shirt that set fire to people with a flamethrower. The horrible puns, the smoking a cigar, his ice rink gang. Sure they mention his wife as the reason for him doing everything which is true but JESUS! He was a cold Doctory science guy that almost felt bad for the stuff he did to save her. Not a pun making buff macho man!!!! ARGH! WHO THE FUCK CAST THE TERMINATOR AS MR FREEZE ANYWAY! I FUCKING HATE YOU SCHUMAKER!

Moving on to Batman, giving a performance that George Cloony would actually say: I wasn’t that into it. This dude brings in the worst attempt at Batman since my brother put his underpants on his head and tried ziplining down the clothes line. Wooden is not even the word, acting is too fair a comment as Mr heart throb completely shits on my beloved childhood character. Val Kilmer did it better, yeah there I’m fucking saying it, you know what no? ADAM WEST was a better Batman!!! The duality between batman and bruce wayne is non existent, his dark brooding intensity is replaced instead by a cheerful lovable rogue persona. Great. No I mean it its wonderful. YAY CLOONEY! BAH! oh and the batsuit had nipples on it. Nuff Said. 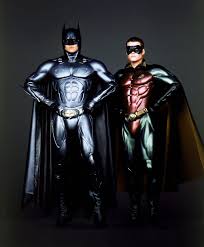 Screw him anyway moving onto Robin. Chris O Donnel does not do a bad Dick Grayson Robin, encapsulating the irratating whiney self righteous ungrateful little dickhead perfectly in my opinion. In this film we see the rift forming between Batman and Robin that ultimately leads to Dick leaving Gotham and taking up the mantle of Nightwing in Bloodhaven. I know it’s not spelled like that and has a weird german letter but leave me alone yeah? So fairs fair he did that good enough. While we’re on the subject of Nightwing anyone else notice that Robins costume was Nightwings only red? What did Joely boy google Dick grayson and come up with that instead of the right one? Yeah o.k gotta update the image for the film and everything but come on. Robins Robin and Nightwing is Nightwing, don’t be a tool bag!

So the stories completely insane as well. Poison Ivy teams up with Mr Freeze with the intent of killing everyone in gotham and replacing them with plants I guess? Frozen loving artic dwelling plants? No? Plants with snake heads then, so mammals suck but reptiles are ok I guess. Also Alfreds sick and Mr Freeze has the only cure so it’s obviously personal for batman to… to uh…. beat him and get the cure? I guess his whole Protect gotham and be the symbol everyone needs thing wasn’t a good enough reason to stop a deranged Doctor from freezing the city then?

OK i’m almost out of space and theres still plenty more to discuss like using satelites to make the sunrise or the hot and cold button in Mr Freeze’s base (SERIOUSLY!? WHY WOULD HE EVEN HAVE THAT?!?!) Posion Ivys wardrobe, the gangs all having flourescant tattoos, the batmobiles new look, alfreds niece and… and… I guess it would have been easier to write everything right with batman and robin in 1000 words or less…. O.k i’m done i’ll just end with. Joel as a batman fan I can only say one thing.. WWWWWHHHHHYYYYYYY